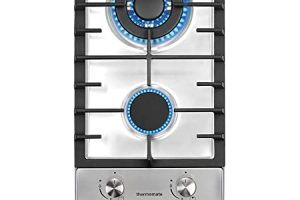 After a couple of years of real life experience on the road, I’m deciding to update the appliances in my 1975 Argosy/Airstream 24. Which is to say, I’m going to get rid of the original MagicChef range and oven.

I have a really great (relatively compact but powerful) microwave and a really great toaster oven (big enough for a 12″ pizza) in the pantry, but those can only be used on shore power or generator.  I’ve always thought it was a good idea to be able to *fully* prepare meals while running only on propane, but after a lot of time in the vehicle, I’m rethinking that notion.  Plus, I’m about to buy a dual-fuel generator, so technically I will be able to use those electric appliances via propane.

A quick aside before I go on… in the past, a “combo” microwave/oven has not been a realistic option.  The technology has just not been there.  No combo microwave unit could cook a crispy crust pizza, so that was that.  I think the technology is improving, but I am still utilizing two separate units.  I make toast/bagels often enough that I feel justified in having a separate microwave and toaster oven, and the toaster oven definitely makes a good pizza (or poppers, or frozen egg rolls, etc.).  Also, there are some really great multi-function toaster ovens now that include an “air fryer” option, so I think a microwave with a separate toaster/oven/air fryer is currently the best set up.

On to the cook top… 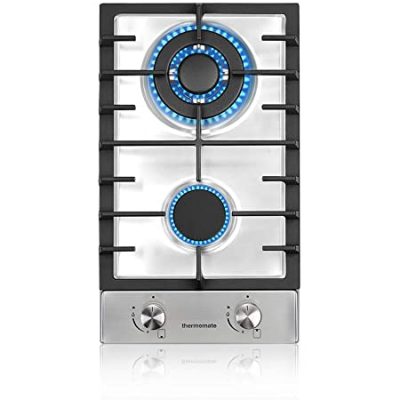 In the past, I usually scoffed when I saw galley set ups that included only a two burner cooktop.  In reality, I have NEVER used more than two burners at once.  I do almost always use two burners, but never more (quoth the raven).

The actual oven has never been used for anything but “storage” (and bad storage at that).  Not in my Argosy; not in my Landyacht; not ever.  Since the toaster oven is a good one, I have always done any “baking” (usually a pizza or lasagna) in the toaster oven.  I know if I was without shore power I couldn’t do this, but at that point planning a different meal is fine.  Plus, I recently installed an exterior grill (Olympian 5500 professional series) that could easily function as an oven if I absolutely had to have a propane powered oven to cook something.

So now the question is: what cooktop to install?  The main issue I have with the current cooktop (other than taking up too much counter space), is that the burners don’t have a high enough output.  I think they were probably originally rated around 6500 BTU, but after 40 years, even that is likely an optimistic figure.  It takes a million years to heat up water for coffee, and I can’t even think about boiling a large pot of water for pasta.  This probably makes this particular cook top safer (it’s not creating as much combustion exhaust inside the camper), but I am aware of the issue and pay attention to that factor when cooking, so I’m comfortable moving to something with a higher BTU output.

Another factor that needs to be considered is the “travel-ability” of the cook top unit.  What this means is being able to cover it up (ideally creating a flush countertop) and not having the burner covers, cooking grates, etc., rattle around while bouncing down the road.

There are a slew of $100-200 two burner units on Amazon, etc., but even if they are labeled “drop in,” almost all of them sit above the counter.  They also have grates and burner covers that simply rest on the surface, so they will definitely bounce around and cause a lot of noise (and possibly damage) with road vibration.

It’s also surprising to me how many cook top burners, even ones designed specifically for RV’s, have only 120v igniter options (they plug into a regular household outlet just to start the flame).  Why in the world isn’t 12v or even a AA battery the standard here?!  That problem can be easily remedied with modification (installing your own igniter), but it seems crazy that I will have to make this mod in the first place. 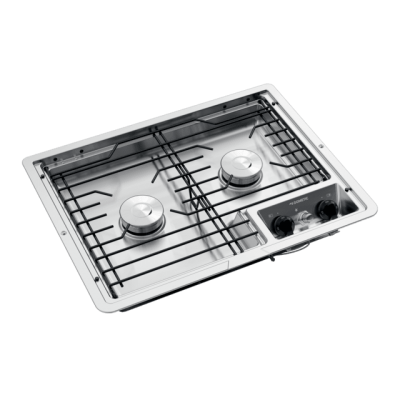 Dometic seems to be the only readily available unit that is properly “recessed,” but the burners are only rated 7,200 and 5,400 BTU.  This unit does however have a 12v igniter, so at least there’s that.  I don’t think I would be happy cooking on the “wire” grate pictured on the unit above, but for an extra $50 they do offer a more sturdy cooking grate option.  Here’s the kicker though… all of the reviews I’m reading about this unit (mostly 1 star) are people ranting about the fact that the description does not disclose that you can’t use it over 4,500 ft.!  I LIVE at 6,000 ft., so this thing won’t even work in my driveway!  Obviously the Dometic is not for me.

All of the other recessed propane burners I’m finding are really chintzy looking “camping” units (I’m looking at you Atwood and Suburban), so I have a feeling I’m going to end up finding a commercial two burner unit and modifying it for my own needs.  I plan on installing a butcher block countertop, so I could modify the opening to allow the cook top to sit lower, and then I can make a flush-fit cover.  So… as usual, I guess custom is the only answer.  Perhaps I will dismantle a stainless steel grill and go from there.

I do have to admit, this little Wedgewood is gorgeous… 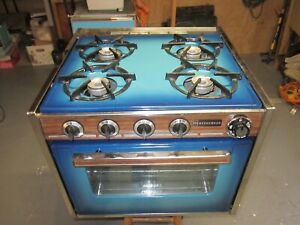 If you find something here that makes your life a little easier and you'd like to reciprocate, click the link below! Donations are processed through PayPal via Digabyte, LLC.