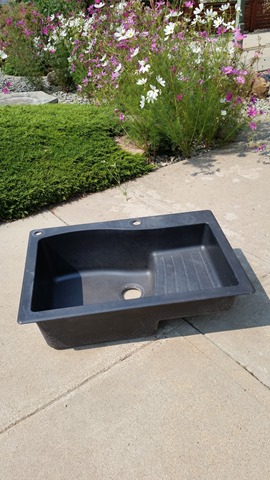 I’ve been thinking about using a utility sink (often referred to as a “slop sink” or “mop sink”) for our Airstream’s shower pan.  I was at an architectural salvage place last week, and they had a high-end, black kitchen sink.  PERFECT.  It looks cool.  It’s very sturdy.  And it’s a single basin with a kind of “step” for dishes that will now be an actual step!

There are two holes (faucet and soap dispenser) that will either get plugged, or maybe I’ll actually run copper pipe through the holes as part of the shower design.

This “designer” sink obviously looks waaaay better than a plastic slop sink, even though it weighs a bit more (though, that comes with being much more durable than thin plastic).  I think having a shallower sink (vs. a utility sink) will be better too.  It’s still deep enough for a kid to take a bath, but it won’t be such a pain to climb in.

3 thoughts on “Using a Kitchen Sink for a Shower Pan”

If you find something here that makes your life a little easier and you'd like to reciprocate, click the link below! Donations are processed through PayPal via Digabyte, LLC.